Chinatsu is the Bossy Tsundere of Fujisawa Academy. She spends her days patrolling the Academy Hallways dishing out grief to anyone who dares to turn up late for class, or run in the corridors. She is often seen with Kujo.

But the thing is - she definitely has something to hide and it's arguably one of Fujisawa Academy's biggest secrets. Because for an Academy of such importance in the community, no one has ever seen the principal. Some people claim to know who he is, others deny all knowledge... To solve that mystery, you'll have to use your Kotodama power. 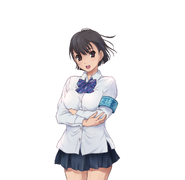